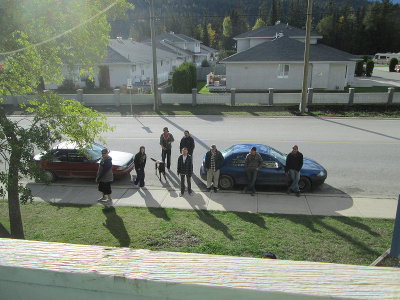 Some present. The six on the right are also tenants. 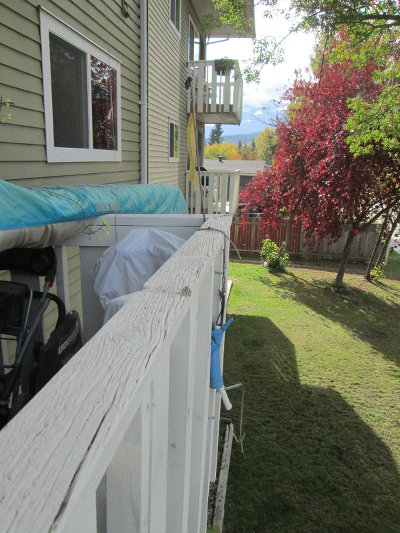 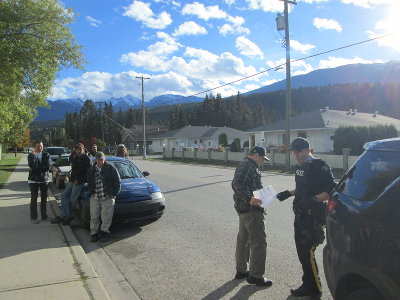 Group. From right: cst Diddams, owner Horak with worthless lawyer letter trying to justify his actions to the police, manager Craig Ross wearing glasses and other tenants supporting the assault. 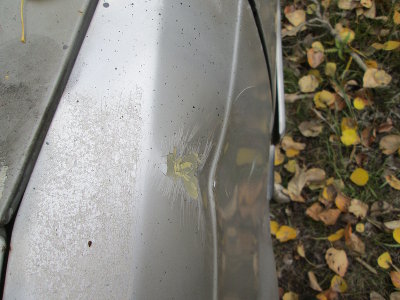 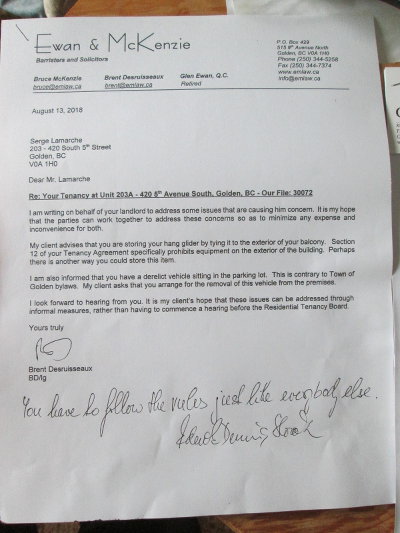 Letter from the lawyer Desruisseaux in which he claims that the rental agreement prohibits hang gliding attached to the balcony and where he also claims that my Tercel is derelict and that the city forbids it. This letter was served to me three weeks after the written date (2018 Sept. 7). Horak added his little note, strange considering his contempt of the law. He also took the opportunity to verbally threaten me with towing my Tercel in a week, contrary to what is said in the letter. 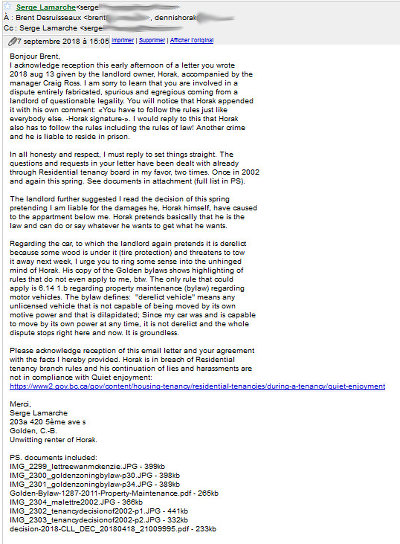 My reply to Horak and Desruisseaux which remained unanswered. Horak acted on the following Sept. 24 certainly without the support of his lawyer. Here, I explain that Horak does not have the right to demand these things because a decision dating back to 2002 granted me the right to keep not one, but two deltaplanes securely attached to the balcony. My car is not derelict and moreover, the municipal law does not even forbids uninsured or derelicts cars on private land. In addition, Horak implicitly admitted during the previous spring hearing that he had sabotaged the water pipes in my apartment while I was not looking. He had cursed both times. See below. 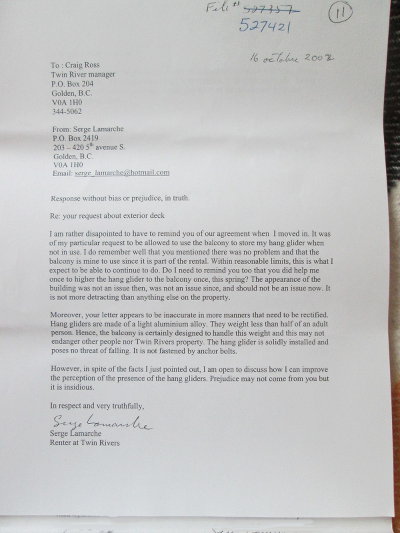 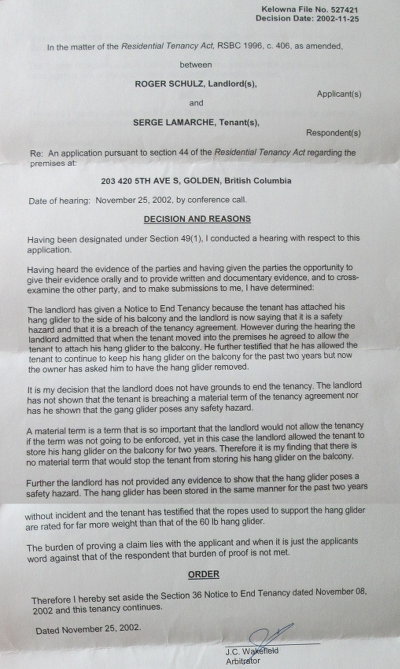 Municipal rule about vehicles that clearly shows uninsured vehicles and even derelict ones are allowed (the Tercel works and I recuperated it by insuring it and driving it over 30 km):
TOWN OF GOLDEN
BYLAW NUMBER 1287, 2011
PROPERTY MAINTENANCE
"derelict vehicle" means any unlicensed vehicle that is not capable of being moved by its own motive power and that is dilapidated;
"dilapidated" means means a state of disrepair or ruin apparently resulting from disuse or neglect;
"unlicensed vehicle" means a vehicle for which evidence of current insurance to drive the vehicle has not been produced on the request of a Bylaw Enforcement Officer;
3. REGULATIONS
(4) An owner or occupant of any land, property or premises:
d) other than as permitted under the current Town of Golden Zoning Bylaw as it may be amended or replaced from time to time, and in accordance with a business licence issued by the Town, must not cause or allow to accumulate or remain on or around a parcel or premises:
i. more than two unlicensed vehicles, ,
ii. more than one derelict vehicle,; or
iii. more than one inoperative trailer or vessel or parts thereof. 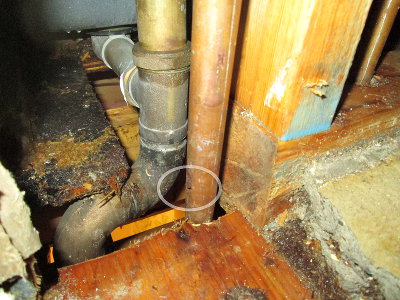 Sabotaged pipe. This pipe was sabotaged on 12 july 2015 by Horak with the manager present. I had heard Horak swear and scram and the manager explains Horak enlarged the hole with a jigsaw supposedly by accident. The next sabotage showed that Horak did not do it by accident. 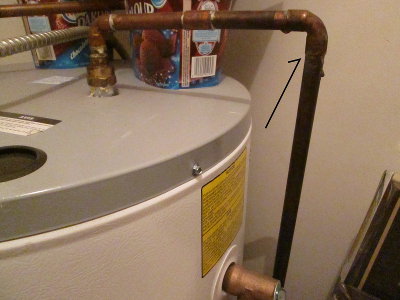 Sabotaged elbow. Photo taken after the repair. This elbow was sabotaged with a wrench by Horak on 12 july 2015. The arrow shows where the elbow weld was loosened and the water leak direction downward. 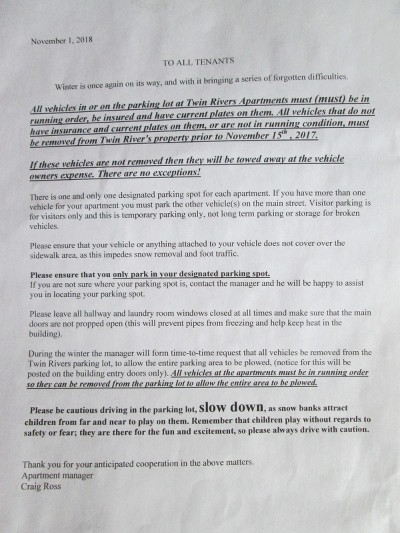 Note to renters that forbids uninsured vehicles and threatens to tow them. Theses forbiddings and threats are not legal. Since years, it was proven false that cars have to even be moved to remove the snow. For example: 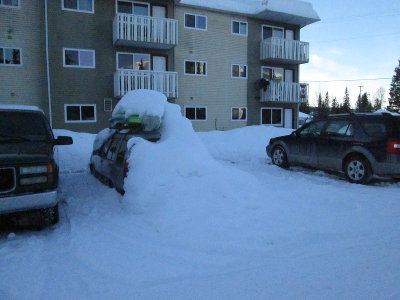 Car under snow. Many other vehicles moved little and did not cause any issue during the preceding 18 winters I lived in this appartment.

At the first hearing of my complaint to Tenancy Branch BC about abuses and crimes by Horak on nov 6, the lawyer immediately accepted to pay for the towing, insurance and hearing fees, of the total mount of 256 $.

At the second hearing november 29, I accepted the offer of moving on may 1st with free rent until then and $1000 for my moving expenses before the hearing start, at the arbitor insistence. I stopped the direct fight for freedom as a renter, which could have helped the others because it was getting less worthy with neighbours so fascists (some are also criminals). It is certain that the owner would have lost again since his eviction was based on lies and puerile crying like his attempt of the spring. This time, his lies were graver and could have cost him more, hence the lawyer, a protection against criminal charges.

Intro: After discussions with cst Diddams and cpl Williams, it is unfortunate that the investigation apparently did not determine the truth and the facts of the events entirely. It is disappointing that even with their powers, the police can't fight crime better and can't nab criminals better. I want to clearly report the facts here and discuss them in conclusion.

Facts: On sept 24 around 17:00 I was on the computer working when I hear noise outside. I see a ladder apposed on the balcony above. A few minutes later I see Horak, the owner of the building, on the ladder seemingly doing something about the balcony above. I hear a female voice asking «what is he doing?» and Horak answering «he's sitting by the computer doing nothing». I see Horak going down the ladder but I make no case of it and continue working.